Win7codecs is listed in Codec Packs/ Video Codecs category and made available by Shark007 for Windows. Unfortunately, we have not yet reviewed Win7codecs. If you would like to submit a review of this software, we encourage you to submit us something!
Win7codecs review by publisher Shark007:

What is Win7codecs software from Shark007, what is it used for and how to use it? 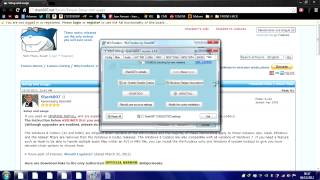 See all videos
A full codec package for Windows 7

This package supports 18 localizations. The default is Codecs have been a problem for most users at one time or another. This is because there has never been an 'out of the box' working solution that the average computer user could install and just have everything work properly from the beginning. There are several decent codec package solutions out there, but none of them did everything I wanted. I was always in need of a tweak, adjustment, or even a re-installation just to get the codecs I needed/wanted and most of the time, the file still didn't play properly. I've never claimed to be a media guru. My media experience prior to creating these packages was to doubleclick a file I downloaded and hope that it played. So with the help of the MSFN community, I decided to package up the bare minimum of codecs required by most computer users and share them with the rest of the world.

The installer will automatically remove most other popular codec releases from your computer before installing this concise yet comprehensive package. You won't need to make any adjustments or tweaks to enjoy your media content immediately. Windows Media Player and Windows 7 Media Center will instantly recognize all your files as playable.

It does not contain a media player and it does not associate filetypes. With this package installed you will be able to use any media player, limited only by the players' capabilities, to play all movies and video clips. Streaming video is supported in several formats in all popular web browsers. Users of Win7 codecs have the ability to choose what is installed and where to install it using the public redistributable. After installation you can select to remove specific portions without removing the entire package. You can also re-add the removed items at any time.

Download.hr periodically updates software information of Win7codecs from the software publisher (Shark007), but some information may be slightly out-of-date or incorrect. Win7codecs version 2.3.9 for Windows was listed on Download.hr on 18.02.2010 and it is marked as Freeware.

All software products that you can find on Download.hr, including Win7codecs, are either free, freeware, shareware, full version, trial, demo or open-source. You can't download any crack or serial number for Win7codecs on Download.hr. Every software that you are able to download on our site is freely downloadable and 100% legal. There is no crack, serial number, keygen, hack or activation key for Win7codecs present here nor we support any illegal way of software activation. If you like software product please consider supporting the author and buying product. If you can not afford to buy product consider the use of alternative free products.

Is it safe to download and install Win7codecs?
Win7codecs was checked for possible viruses by various leading antivirus software products and it is proven to be 100% clean and safe. Although, no malware, spyware or other malicious threats was found we strongly advise you to check product again before installing it on your PC.

Please note that laws concerning the use of Win7codecs may vary from country to country. Please be sure that you are using Win7codecs in accordance with the law in your country.


How do I uninstall Win7codecs in Windows XP?


Nothing! Nada! Frei! Niente! It is FREE to download Win7codecs from Download.hr portal! We collect and list worlds best software products on Download.hr portal so everyone can enyoj in them. All products here are legaly listed but you can read additional information about license on owners web site.