What is Snow Fortress software from Mythical City Games, what is it used for and how to use it? 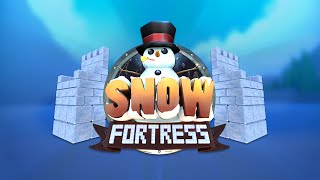 Snow Fortress is a room-scale Virtual Reality snow fort building & battle game. Relive your childhood by building snow forts as you prepare for epic snowball fights! Unlock tools to protect your fort and deliver a fury of snowballs at your opponents!

Throw snowballs or use your slingshot to do some real damage

Play against friends in online multiplayer

Snow Fortress is created from the ground up for room-scale VR and supports both HTC Vive and Oculus Rift. It takes full advantage of tracked controllers to let you build the perfect snow fort ... and then watch it get trashed by an army of angry snowmen.

Download and install Snow Fortress safely and without concerns.

Snow Fortress is a game developed by Mythical City Games and it is listed in Games category under Virtual Reality Games. Snow Fortress is licensed as Shareware which means that game is provided as a free download to users but it may be limited in functionality or be time-limited. You may need to pay at some moment to continue using product or to use all functionalities. You can run Snow Fortress on all modern Windows OS operating systems. Snow Fortress was last time updated on 19.02.2017 and it has 1,513 downloads on Download.hr portal. Download and install Snow Fortress safely and without concerns.
Snow Fortress Requirements
OS: Windows 7 SP1 or newer
,Processor: Intel� i5-4590 / AMD FX 8350 equivalent or greater
,Memory: 4 GB RAM
,Graphics: Nvidia GTX970, Nvidia GTX980M, MD Radeon? R9 290 equivalent or greater
,DirectX: Version 11
,Storage: 500 MB available space
,Additional Notes: Requires HTC Vive or Oculus Rift (with Touch controllers),

All software products that you can find on Download.hr, including Snow Fortress, are either free, freeware, shareware, full version, trial, demo or open-source. You can't download any crack or serial number for Snow Fortress on Download.hr. Every software that you are able to download on our site is freely downloadable and 100% legal. There is no crack, serial number, keygen, hack or activation key for Snow Fortress present here nor we support any illegal way of software activation. If you like software product please consider supporting the author and buying product. If you can not afford to buy product consider the use of alternative free products.

Is it safe to download and install Snow Fortress?
Snow Fortress was checked for possible viruses by various leading antivirus software products and it is proven to be 100% clean and safe. Although, no malware, spyware or other malicious threats was found we strongly advise you to check product again before installing it on your PC.

Please note that laws concerning the use of Snow Fortress may vary from country to country. Please be sure that you are using Snow Fortress in accordance with the law in your country.

How to uninstall Snow Fortress?


How do I uninstall Snow Fortress in Windows Vista / Windows 7 / Windows 8 / Windows 10 OS?


How do I uninstall Snow Fortress in Windows XP?

How much does it cost to download Snow Fortress?


Nothing! Nada! Frei! Niente! It is FREE to download Snow Fortress from Download.hr portal! We collect and list worlds best software products on Download.hr portal so everyone can enyoj in them. All products here are legaly listed but you can read additional information about license on owners web site.